Home to some 1.27 million people, the city of Saitama is proud to launch a brand new international art festival, Saitama Triennale 2016. Open to the world, the event will serve as a platform for creativity and exchange.
The theme for 2016 is "Envisioning the Future!"
The festival is not just about appreciating art, but about making it and participating, too. The festival will take place at various locations, each offering perspectives on the attractions particular to this living city - its origins, little known nature and the history of its land. Artists from Japan and around the world will discover Saitama's color and diversity. Citizens of the city, together with visitors, will discover their own future.

Projects Organized by the Executive Committee

In the Art Projects, in which the director will be directly involved and develop, artists at the forefront of their fields in Japan and abroad will implement projects mainly using installation, video, theatrical plays, dance, performances and other physical expressions while mostly working on the site.

In fiscal 2015, local research was conducted that took a cross-sectional and locally-oriented view of Saitama City from various perspectives such as geography, geology, vegetation, weather, history and culture. “Having deepened the understanding of the area,” study results will be publicized to participating artists and residents.

In addition to theatrical plays, music and dance performances and art exhibits under the art festival’s theme of “Envisioning the Future!” by openly invited participants at the cultural facilities in the city, other projects will be developed in cooperation/collaboration with culture/art groups, private firms and resident groups.

Using the triennale as momentum, we will provide the necessary support so that creative activities generated by businesses such as those in the city will be continuously developed. 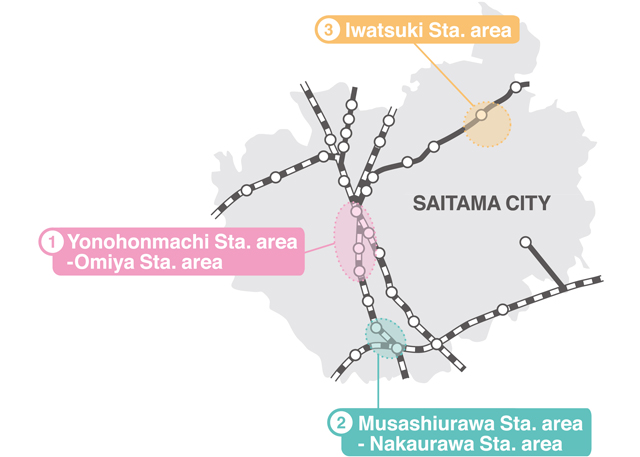 Along with the areas surrounding Omiya station and Saitama Shintoshin station that represent the urban landscape of Saitama city, this region has Sainokuni Saitama Arts Theatre that can afford enough space for a large number of people. It is here where one can feel its vibrant atmosphere and its fast paced way of living.
In response to these characteristics, we will organise a variety of art events, spreading across various sites of the area, in addition to setting up a number of exhibition sites.

We chose this area as it encapsulates Saitama’s residential area as the ‘daily living city’. We set a walking path starting from the area around Musashiurawa station where lots of residential land development projects are still going on. The audience will be led to walk along the JR Saikyo line towards its quiet residential area, through to Besshonuma Park and finally onto Nakaurawa station. In doing so, audiences are able to experience the many different art projects as well as the scenes of daily life along the way. We are especially focusing on converting the four buildings which used to be the official house of the department directors in the prefectural office, into a multifunctional site which consists of exhibition space as well as a rest station.

The former Saitama Prefectual Folklore Museum is located 1.5 km away from Iwatsuki station. Despite its location, only a short distance from Route 16 running by the outer edge of the Greater Tokyo Area, this old building seems to be somewhere unreal; isolated temporally and spatially and fully imbued with a magical atmosphere. We chose this place as a main exhibition site to create an overwhelmingly unusual space. In addition to this, we have set up a base for the artist-in-residence project in the area around Iwatsuki station, which will enable visiting artists to communicate with, as well as derive inspiration for their works from the locals.